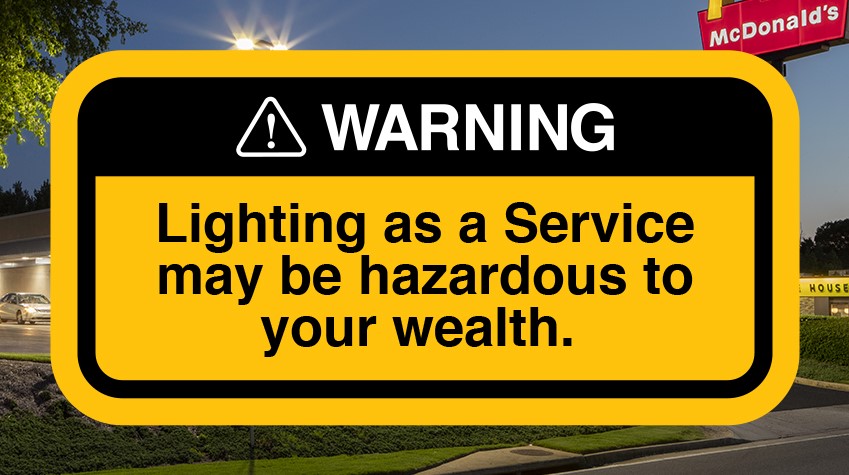 Warning: Lighting as a Service may be hazardous to your wealth.

Recently, a lighting competitor approached one of my customers with a proposal using a subscription-based lease model — aka Lighting as a Service. In this scenario, my customer would agree to pay 75% of the estimated energy savings each month, and in turn, the lighting contractor promises to upgrade the exterior lighting to LED and maintain it. Additionally, if some technology superseded LED in the future, the contractor would upgrade at no charge. In theory, my client would save 25% on energy costs, eliminate their maintenance costs, and get new LED lighting with $0 out of pocket. What a deal, right?

The devil always is in the details. Let us look at them more closely.

First, let’s consider the likelihood of another technology superseding LED. LED was invented in the 1960s by GE. It wasn’t until the late 1990s that it was could produce white light in sufficient quantities for use in illumination. By 2010, the light output had increased and cost decreased to the point where an LED replacement versus a standard lightbulb was commercially viable. By 2016 — 50 years later — roughly 30% of commercial lighting in the US had converted to LED. In short, it has taken one-half a century to get LED to the point that it is commercially viable, and businesses have been slow to adopt it. So, the possibility of upgrading a customer’s lighting to some new disruptive technology is infinitesimally small. Merely a marketing ploy.

Secondly, let’s factor in the warranty. Any reputable LED product comes standard with a 5-year warranty, and most can be extended to 10 years. What’s more, the rated life of LEDs and their drivers exceed ten years in this application, so there is little risk that Lighting as a Service would have to pay for repairs in the next decade — another empty promise.

Finally, let’s take a hard look at the financial details. In a vacuum, their proposal sounds good. But other alternatives produce more significant savings. One option, which many of my customers prefer, is financing via a Capital Lease.  It, too, can be structured with no up-front investment. Unlike Lighting as a Service, which is a never-ending lease commitment, Capital Lease financing is planned for a fixed period — typically 3 to 5 years. And, at the end of the lease, you own the lighting equipment. More importantly, you own 100% of the savings after the financing is complete. 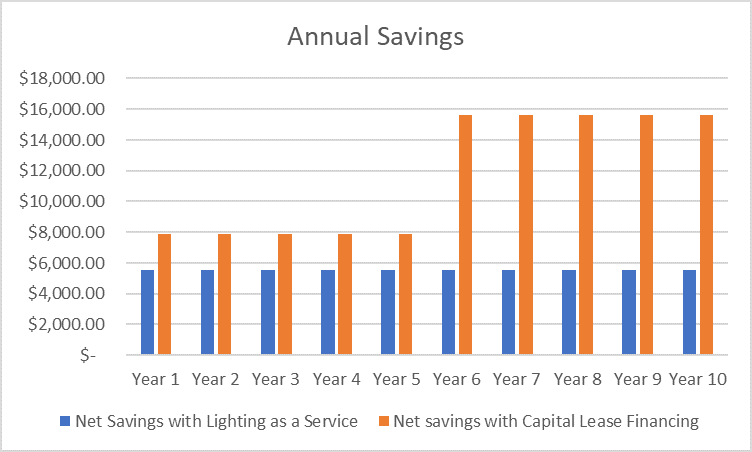 Here is a comparison of the annual savings. In the first five years, a customer saves an additional $2,400 a year by going with Capital Lease Financing. In years 6 through 10, the savings jumps to $10,000 per year. And in ten years, a customer saves an additional $62,000 by using Capital Lease Financing. At no point is Lighting as a Service a better deal.

$62,000 is a lot of money. My customer agreed. They had us upgrade their lighting to LED, and they financed it with a Capital Lease.

To find out more about commercial lighting service and what makes Lighting Technologies better than other lighting contractors, click here.

Ask how Lighting Technologies can help you maximize your savings on your LED upgrade project. Call us at (678) 945-0467 or send us an online request and a sales rep will get back to you within one business day.

“Save your energy. We’ll take care of it!”